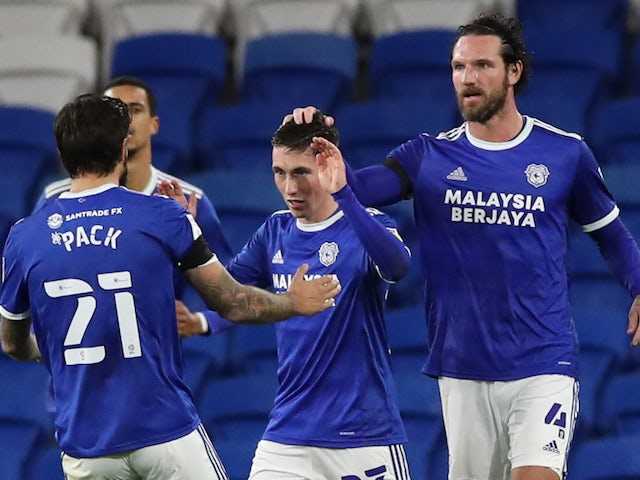 Dominic Solanke had actually put the Cherries ahead.

Harry Wilson made Cardiff a point against Bournemouth on his first Bluebirds start as the 2 sides shared an amusing 1-1 Championship attract the Welsh capital.

Dominic Solanke tapped home in the first half to offer the Cherries the lead after they had actually reacted remarkably following some careless death early on.

However they were made to spend for not extending their lead when Liverpool loanee Wilson– who invested last season at Bournemouth– equalised.

The game’s key minute came when exceptional Cardiff goalkeeper Alex Smithies produced an exceptional save to stop Solanke making it 2-0 and Wilson went directly up the other end to level the scores.

Wilson was joined in making his first Cardiff Championship start by 19-year-old left-back Joel Bagan, who actioned in with Joe Bennett and Greg Cunningham both out hurt.

Wilson shot wide after only 18 seconds in an even opening duration during which Arnaut Danjuma and Adam Smith had Bournemouth’s best opportunities.

Cardiff’s Junior Hoilett and Will Vaulks blazed over as the chances continued. Wilson was the home side’s main risk at the centre of their assaulting trio behind striker Robert Glatzel.

Jefferson Lerma required Smithies into action and Jack Stacey might notconvert Smith’s cross, however Stacey offseted the miss out on just prior to the break after being played in by Lerma.

His cross was best and, with the Cardiff defence passive, Solanke opened the scoring in the 35th minute.

Wilson fired just large prior to the break as Cardiff started their look for an equaliser, however Bournemouth were directly on the attack in the second half.

Smithies was the hero when he stopped Solanke from doubling the Cherries’ lead– Stacey remained in acres of space down the right and his cross discovered Solanke, only for Smithies to in some way get something on the strike to deflect it on to the bar.

Cardiff went directly up the other end and Wilson struck the woodwork. A hallmark free-kick from the Welsh international was snapped on to the bar by Asmir Begovic.

Vaulks’ header worked Begovic once again and it was that man Wilson who levelled as he transformed Hoilett’s cross.

Stanislas was next to strike the bar with a relentless set-piece which left the woodwork rattling and Smithies motionless.

The opportunities kept coming and Solanke missed out on a caretaker of a header, however the sides might not be separated in spite of late Bournemouth pressure.

Wales defender Chris Mepham appealed for a late penalty as the Cherries built up a head of steam prior to going for a point.