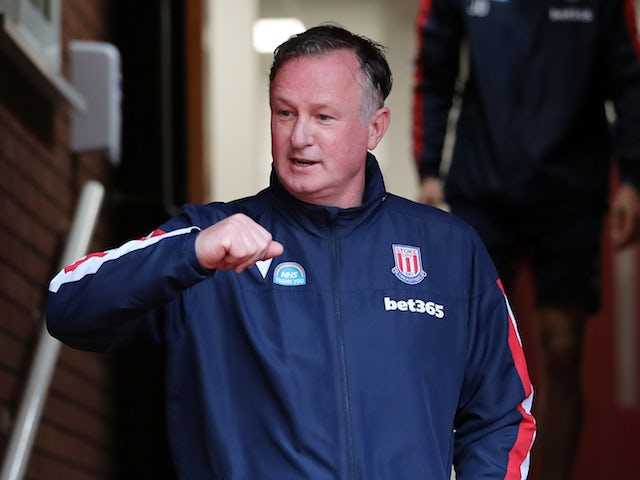 The Potters needed to play half-hour with 10 men.

Stoke boss Michael O’Neill was unhappy with referee Michael Salisbury after his side have been held 2-2 by winless Barnsley.

Tyrese Campbell and Tommy Smith cancelled out goals from Elliot Simoes and Dominik Frieser, however the big speaking level was the disputed sending-off of defender Nathan Collins.

Collins was proven a straight red card for an off-the-ball incident with Frieser on the hour mark, a decision which didn’t sit effectively with Northern Irishman O’Neill.

“I’ve watched it back and I did not consider it was a red card on the time. It was the assistant who notified the referee, we will inform that from listening to his shout.

“What’s occurred actually is there is a coming collectively and our centre-back has tried to dam his run a little bit bit and the Barnsley player has thrown himself to the bottom holding his face.

“The assistant has deemed {that a} red card, but it surely’s disappointing that the player would do this.

“And secondly disappointing that it was given as a result of it was a extremely poor decision.

“We’ve footage from our personal analysts, so we’re what our choices are for an attraction tomorrow.

“However, the players deserve enormous credit for the injustice of the decision and then to come back to make sure we took something from the game.”

Stoke rode their luck at times however Smith’s first goal since March 2017 made certain of some extent.

“When we lost the first goal, which was a poor goal for us to concede, we started to get a grip on the game,” admitted O’Neill.

“We knew Barnsley would come and press us, however we nonetheless tried to proceed and construct the game from the back which was a constructive.

“Our final ball was a little bit bit weak at times, however our response to dropping the goal was good.

“However essentially the most regarding factor is the second goal. We just switched off.

“We did not defend effectively on two or three events the place we must always have been tighter. In the end, we go in 2-1 down – and that ought to have by no means been the case.

“However we received ourselves stage once more and I think we have been in a robust place to go on and win the game till, clearly, the red card.

“We haven’t looked like conceding goals like that this season, it was out of character. We were too open at times and missed tackles at key moments.”

Annoyed Barnsley caretaker boss Adam Murray admitted his side missed a trick as they continue to be winless within the Championship to date this term.

“It’s more frustration than anything that we haven’t come away with a win,” admitted Murray.

“I assumed total the efficiency was very good. I think we have been in management for lots of the game, I assumed we had a game-plan which labored.

“We scored two very good goals. We have got a squad of gamers who can score goals, particularly in these ahead areas.

“We have spoken so much over the past couple of weeks about entering into higher areas and turning probabilities into very good probabilities. I think we did that tonight.

“But unfortunately in the last 20 minutes we were just lacking that finishing touch. It’s frustrating.”

Goalkeeper Jack Walton spilled a routine cross to reward Smith Stoke’s second equaliser, however Murray burdened: “It is a kind of issues. Goalkeepers make errors and so they all the time get punished, however we won’t discuss it once more.

“Jack’s obviously frustrated, but if it wasn’t for Jack I don’t think we’d still be in the Championship. We move on.”